Sharpe Farm Supplies was founded by Bill and Marion Sharpe in 1986 as a local crop retailer of seeds, fertilizers and crop protection products.   Both born and raised on farms in Ontario, Bill and Marion continued farming in Wellington county as a cash crop and beef operation while raising a young family.  As one local Ag Retailer retired, they diversified the farming operation and started their own retailer business at the main farm complex which remains the corner stone of the family’s operations.

As the early years proved successful they continued to add products and options to their business.  Application, grain handling, feed, retail, logistic services and of course staff as the company grew.  By 2000 the three boys became increasingly more active in the business.  Grain handling was expanded and the feed business was becoming an important aspect of the business.  The initial passion for farming had never faded and it too held its own as an anchor for the business growing crops and finishing cattle.

By 2010 the three brothers had become integral components of the business along side their parents.  The retail footprint continued to expand along side the commercial feed business.   Locations were added in Moffat, Freelton, Fergus, Elmira and Guelph.  Grain handling expansion continued with increased yields and efforts to adopt more technology on equipment was surfacing.

2015-2020 involved a large change with the company and the Guelph location.  Sharpe Farm Supplies had outgrown its original infrastructure.  Larger warehousing, retail store, fertilizer handling, crop drying and improved distribution amongst the retail network was required to continue on a successful path.  Construction began in 2014 and was completed in 2018 at the Guelph location.  These buildings serve as the headquarters and function as the primary delivery mechanism to handling feed, grain, crop protection, fertilizer, seed and retail products.  Ownership of the company was also changed during this period with the 3 brothers John, Paul and Michael equally sharing in the company. 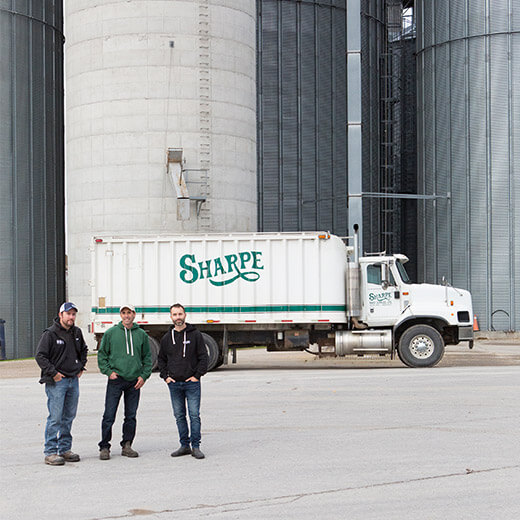 Sharpe Farm Supplies Ltd. is “Committed to Our Customer’s Needs” by providing timely, top quality products and services in a safe, controlled manner by a team of professional, dedicated and well-trained employees.